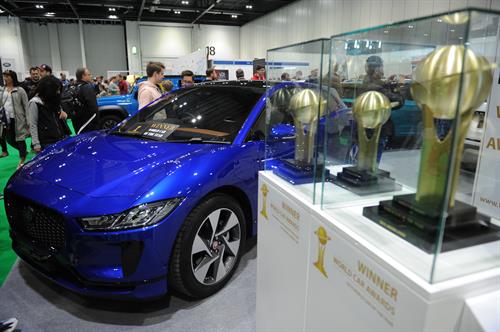 The World Car Awards Garage proved to be one of the biggest, and busiest stands at the London Motor & Tech Show which closed its doors to the public earlier this week.

The Jaguar I-PACE recently won the coveted World Car of the Year, World Car Design and World Green Car titles for 2019, and those three trophies – along with the car itself – formed the centrepiece of the World Car Garage at the packed ExCel exhibition centre which sits alongside the River Thames to the east of the city.

But equally popular among the men, women and children who attended the London Show were the models parked-up alongside the I-PACE – the McLaren 720S (newly-crowned World Performance Car) plus the Suzuki Jimny (the current World Urban Car and the only Japanese model to win a World Car title this year).

Also present were a handful of factory-fresh contender cars in the running for trophies in 2020. Of these, the all-new Range Rover Evoque and a pre-production version of the Kia Soul EV were of most interest to the public.

Mike Rutherford, Juror, Director & Co-Chairman of the World Car Awards programme was delighted with the show, the attendance, the atmosphere and the world-class quality of the ten vehicles on display in the World Car Garage.

“We exhibited what our 80-plus jurors across the globe decided are the very best cars on sale in 2019. But we also gave a glimpse of future models, one or two of them making their public debuts in Britain and desperately hoping to win World Car titles in 2020.

“This month’s London Show was the best for years. Next year it’s on course to become even more impressive and well attended. I urge everyone from motorists and their passengers to vehicle manufacturers and their dealers to get behind this annual event and recognise it for what it is – the closest thing we’ve got to the British Motor Show that scores of millions of car users in Britain want, need and deserve.”

“Having the World Car Awards, the winning models and the trophies they won at the London Show was a coup for us. We look forward to the return of the popular World Car Garage in 2020.

“This year we were overwhelmed by the positive feedback from manufactures, dealers, press and public. We now have the blueprint for the future. But we still face the challenge of getting those vehicle makers and retailers to fully back us, because it is their show as much as it is ours.”

The World Car Awards/World Car of the Year competition is independently and consistently ranked the No. 1 automotive awards programme on the planet. In the last 12 months it has had a strong and formal presence inside or adjacent to the Paris, LA, Geneva, New York and London motor shows, plus CES in Las Vegas.World Car awards on