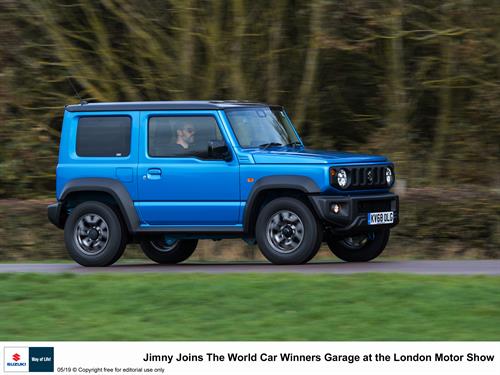 Following on from the recent announcement as the winner of World Urban Car, Suzuki is very pleased to unveil its Jimny on the World Car of The Year stand at the London Motor and Tech Show at ExCel.

To qualify for the initial World Urban Car judging process, vehicles had to be less than four metres long, suitable in design for everyday use in an urban environment and also on sale across two Continents by the deadline of Spring 2019. At just 3.64 metres in length, the Jimny easily qualifed and was shortlisted as a top three finalist in both Urban and Design categories in March of this year.

“Once again, Suzuki is punching well above its weight in the World Car Awards. As the just announced winner of the World Urban Car of the Year prize, the Jimny beat off stiff competition from its German and South Korean rivals and Suzuki is the only Japanese manufacturer to win a coveted World Car trophy in 2019. This should worry the larger, wealthier car companies of Japan.”

Local Suzuki dealer group, Glyn Hopkin, with branches in Buckhurst Hill, Watford and also Cambridge are exhibiting five examples from the Suzuki range at the show including the recently launched Swift Attitude and best selling Vitara model. Glyn Hopkin is a long established dealer group having first opened for business in 1993.

Head down to The London Motor and Tech show, which is being held at London ExCeL from the 16th to 19th May. With tickets costing from just £25 for a great day out.