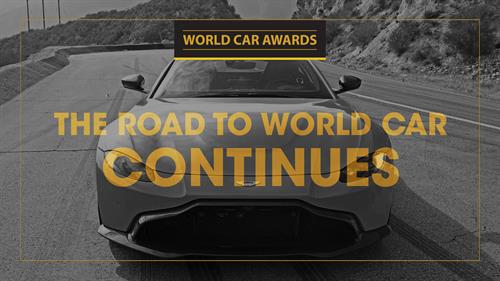 The Road To the World Car Awards  doesn’t really stop. In fact, the journey is continuing right now at The Leasing.com London Motor & Tech Show until May 19th.

The World Car Garage is being staged for the fourth consecutive year offering visitors a glimpse of the 2020 World Car contenders as well as celebrating the current 2019 winners.

The cars being exhibited in the World Car Garage are: the Jaguar I-PACE (2019 World Car of the Year, World Car Design of the Year and World Green Car), the Audi A7 (World Luxury Car), the McLaren 720S (World Performance Car), and the Suzuki Jimny(World Urban Car).

Sitting alongside or inside these winning models are the coveted World Car trophies that were awarded at a prize-giving ceremony in New York last month. The London Show is unique in that it gives car enthusiasts a rare opportunity to be photographed alongside these priceless trophies.

Also on display in the World Car Garage are the Volvo S60 and the Citroen C5 Aircross which were both Top 5 Finalists in the 2019 World Car competition that has just ended.

As strong contenders for World Car glory in 2020, the all-new Land Rover Evoque, the CUPRA Ateca, the Volkswagen T-Cross and the Kia Soul EV complete the 10-car line-up. The latter is a pre-production prototype version which is making its UK public debut at the London Show, prior to going on sale in Kia UK showrooms at the end of 2019

“We’re delighted to be back on the road in London where every 2019 World Car winner is being exhibited. Four of the six trophies we presented this year were awarded to Jaguar and McLaren. So it seems highly appropriate that these two British firms will have an opportunity to celebrate at the London Motor & Tech Show.”

The Road to the World Car Awards is an annual journey that follows more than 80 of our international journalists as they test-drive, and vote on, the eligible vehicles for the award season.

For 2020, the official launch will take place at the Frankfurt motor show (IAA) on Tuesday, September 10th and will end when the winners are officially announced in all six categories at a the grande finale awards ceremony and press conference that will officially open the New York International Auto Show on April 8, 2020.

World Car will be making several stops along the way including our sixth annual L.A. Test Drives event in Los Angeles in November.

The World Car Finals countdown will begin in early February 2020 as the jurors vote for their favourites and their ballots are tabulated by the international accounting firm KPMG.  First the Top 10 and Top 5 in each category will be announced; followed by the Top Three in the World finalists at the Geneva International Motor Show on Tuesday, March 3, 2020.

The grande finale awards ceremony that opens the New York International Auto Show will be followed again by a stop for the fifth consecutive year at the London motor show in May of 2020 offering a glimpse of the 2021 contenders.