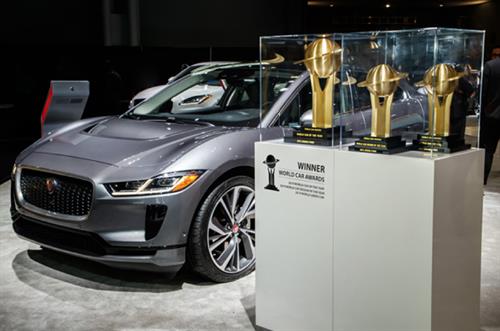 The 2019 World Car of the Year, the all-electric Jaguar I-PACE will be present during this year’s London Motor Show after winning an unprecedented three World Car Awards titles.

I-PACE is showcased at the World Car Awards stand, alongside the World Car of the Year, World Green Car and World Car Design of the Year trophies that it scooped at the New York Auto Show last month. The show is being held at ExCel in London from 16-19 May.

Mike Rutherford, World Car Awards Programme Co-Chairman and juror, said: “Our jurors from all corners of the world have spoken – and they’ve collectively and confidently concluded that the Jaguar I-PACE is the best and best-looking car on sale in 2019.

“The competition was particularly fierce this year, and that makes it even more remarkable that Jaguar cleaned-up. The small, British-based luxury car maker bravely took on the competition and beat them by winning three of the six World Car Awards that were up for grabs in New York last month.”

Beating hundreds of new vehicles from all around the globe and voted for by an expert panel of 86 prominent motoring journalists from 24 countries, the 2019 ‘World Car of the Year’ crown is the highest accolade that any car can receive.

Ian Callum, Director of Design for Jaguar said: “I was overwhelmed and privileged to accept the three awards in New York last month and collecting the World Car of the Year award felt like an ‘Oscar moment’.

“I honestly believe I have the best job in the world designing Jaguar cars and the opportunities presented by designing an electric vehicle are plentiful, something my team has fully exploited. Winning these awards is true recognition of their achievements.”

I-PACE has a state-of-the-art 90kWh lithium-ion battery and delivers a range of up to 292 miles (WLTP cycle). It’s capable of charging from 0-80% in just 40 minutes (100kW DC), or takes just over ten hours to achieve the same state of charge when using a domestic wallbox (7kW AC) – ideal for overnight home-charging.

Head to the show to see all the winner amongst all the other great cars. The Leasing.com London Motor & Tech Show takes place from 16th to 19th May at London ExCel.